Nicole Shi, a Carnegie Mellon junior, had just flown in from a West Coast conference on sustainability and higher education. But any jet lag she might have been feeling was not apparent as she spoke to a crowded room in the Cohon University Center about her experiences as a student working to change her community and her world.

“Civic engagement has kept me sane and happy,” the engineering told the audience. “It has also forced me to ask myself what issues I am passionate about, and what I am doing to address them … the beauty of civic engagement is that there is a space for everyone.”

For Shi, that has meant helping to bring composting to most dining locations on campus to reduce landfill waste as co-president of Sustainable Earth. She has also organized a panel of alumni who are leading social change and arranged for a Syrian refugee to speak on campus as a steering committee member for Partners Allied in Civic Engagement (PACE) 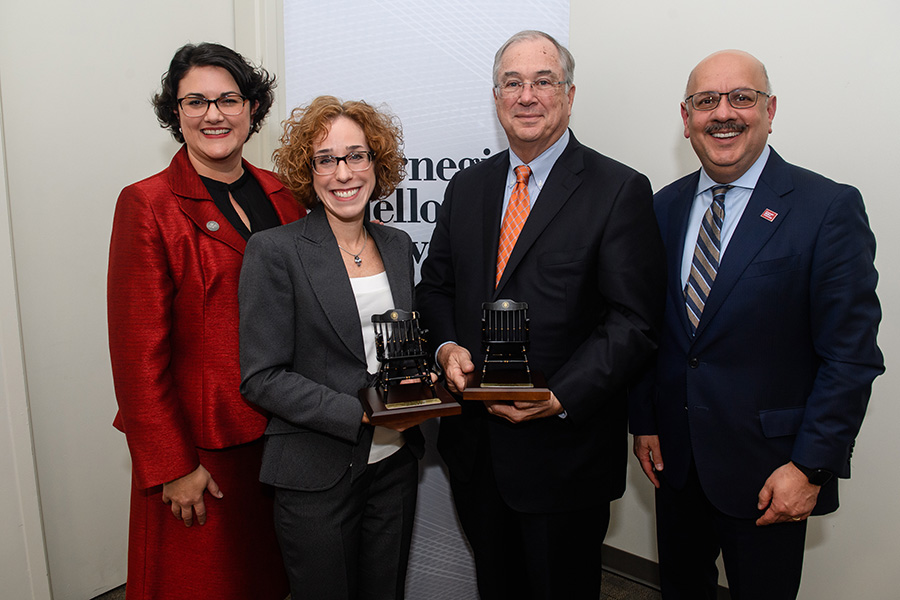 Shi was one of several speakers at the October event to celebrate the James and Sharon Rohr Director of Civic Engagement, a new position that will bring additional energy and resources to CMU’s burgeoning efforts to connect students with their interests in the Pittsburgh region and across the globe. The directorship, the first to be endowed in the Division of Student Affairs, was created by the Rohrs in 2019. Liz Vaughan, the associate dean of student affairs who has championed the university’s civic engagement initiatives throughout her 16-year career at CMU, is the inaugural recipient.

“Anyone who knows Jim Rohr and Liz Vaughan recognize they share a passion for doing good in their community,” Gina Casalegno, vice president for student affairs and dean of students. “In building a vision to make an impact and putting their minds and heart to achieving that vision with others. And in cultivating a spirit of giving back.”

A gift inspired by a lifetime of service

Jim Rohr’s dedication to his community began on the first day of his job at what was then Pittsburgh National Bank. The first piece of paper he signed, Rohr recalled, was his United Way pledge. Giving back was part of the company culture.

Throughout his 42-year career at what became PNC Financial Services Group, Rohr saw how important volunteer involvement was to the organization, the region and the lives of its employees. But bringing organization to what had been less structured volunteer activities — and concentrating efforts around core causes — allowed PNC to increase its community impact. It also became a guiding part of its brand.

Today, PNC’s Grow Up Great program, which was created after employees selected early childhood education as the company’s focus 15 years ago, has made more than $160 million in grants, engaged 5 million children, and benefited from 850,000 staff volunteer staff hours. More than a quarter of PNC employees participate.

Through the gift to endow CMU’s director of civic engagement, and his leadership as chair of the CMU Board of Trustees, Rohr aims to bring similar organization to CMU’s civic engagement initiatives.

“I would like to see student civic engagement and volunteerism to be part of the Carnegie Mellon brand,” Rohr said.

“My dream would be that 100% of our students, when they graduate, would say that they had a meaningful experience giving back to the community.” Jim Rohr

The Rohrs’ gift represents a significant investment in the university’s civic engagement activities. During Make Possible: The Campaign for Carnegie Mellon University, the institution aims to raise program funds, as well as support for a dedicated physical space — all with the ultimate goal of making service a core experience for each and every student, and to increase the university’s collective impact on the surrounding communities.

Liz Vaughan was Casalegno’s first hire after she arrived at CMU, and from their earliest days working together, Vaughan demonstrated her commitment to community service. When she was named director of student activities a decade ago, Vaughan developed a strategic plan that ultimately led to her co-creating PACE, a collaborative initiative that nurtures peer-to-peer student work around civic engagement. Three years ago, to further facilitate expansion in these areas, the division created the Student Leadership, Involvement, and Civic Engagement (SLICE) organization, which Vaughan leads.

Among its achievements have been the Service Saturdays program, during which students volunteer with nonprofits around Pittsburgh; an annual Rise Against Hunger meal-packing event for communities most vulnerable around the world; and the launch of the CMU Pantry in 2018, which assists CMU students experiencing food insecurity.

“We have extraordinary work already happening among our students and faculty in the civic engagement realm,” Casalegno said. “What’s really exciting about this gift is that it will help us tell the story about this work, and provides the opportunity to grow its impact.”

Inspired by Rohr’s own commitment to service, CMU in 2018 launched a Community Service Working Group, which was composed of CMU students, faculty and staff. Rohr joined the group at its inaugural meeting and charged its members with “dreaming big” — creating meaningful opportunities for every CMU student that will anchor and define their time on campus. For Vaughan, the group was a literal dream come true.

“Doing civic engagement work at Carnegie Mellon is not a job for me. It is a passion, a privilege and a calling,” Vaughan said. “It is not lip service to say that I believe Carnegie Mellon students will change the world.”

The vision that has solidified, in part because of the working group’s discussions, is one of bold action. Currently, many CMU students experience civic engagement through one-off activities. In her new role, Vaughan aims to develop sustained and meaningful opportunities that focus on students’ learning and community-identified needs, are grounded in best practices, and ensure students continue to lead the movement at Carnegie Mellon.

Among the initial goals of the program will be to:

“Jim and Sharon Rohr’s gift provides the infrastructure for us to pursue our ambition to establish civic engagement as a foundational student experience,” Vaughan said. “But it also highlights it as a priority for Carnegie Mellon. It’s empowering and provides us momentum, and creates a spark for a cultural shift at the university.”