In September 2017, Hurricane Maria formed in the Atlantic Ocean. On September 20, the U.S. territory of Puerto Rico suffered a direct hit from Hurricane Maria, a disaster causing thousands of deaths, billions of dollars in damage to property and infrastructure, ecological and public health emergencies, and widespread flooding. For nearly a year, some parts of the island were without power or clean drinking water.

Tiffany Taulton (HNZ 2019) lived in Puerto Rico as a child. As a first-year student at Heinz College when Maria hit, she wanted to engage Carnegie Mellon University students with the situation on the island. With the help of supporters and a community of students who were committed to helping, she arranged an “alternative spring break” relief trip to Puerto Rico in 2018 for CMU graduate and undergraduate students.

“CMU in Puerto Rico” is now an official CMU student organization that will live on beyond Taulton’s tenure on campus, with plans to visit the island each year and provide more comprehensive education to students about the political, economic and environmental challenges facing Puerto Rico.

“At Heinz College, we’re studying public policy at one of the top schools in the country for environmental policy and management,” says Taulton. “When you think about all the people in government positions [across the country], many are Heinz graduates. I wanted to introduce Heinz students to Puerto Rico so that when they go into their professional lives they will be able to make informed decisions to support policies that help, rather than harm, the island.”

Taulton’s work to establish and secure this student organization included management, marketing and fundraising skills, acquired through her time at Heinz College.

She raised roughly $45,000 over the two years, built a website, developed a social media presence, and created t-shirts and other marketing materials. All of this in addition to ramping up the pre-orientation outreach and education for students going on the trip. Financial support for “CMU in Puerto Rico” gave the student organization resources to support specific causes, actively solve challenges and create an educational environment for the students.

“Forty-five percent of people on Puerto Rico live in poverty, and there are many people there who have a college education but can’t get a job,” says Taulton. “Unless you live in a place with a large Puerto Rican population, you may not be aware of these issues at all. I wanted to change that, because people on the mainland need to think more about Puerto Rico and what’s happening there.” 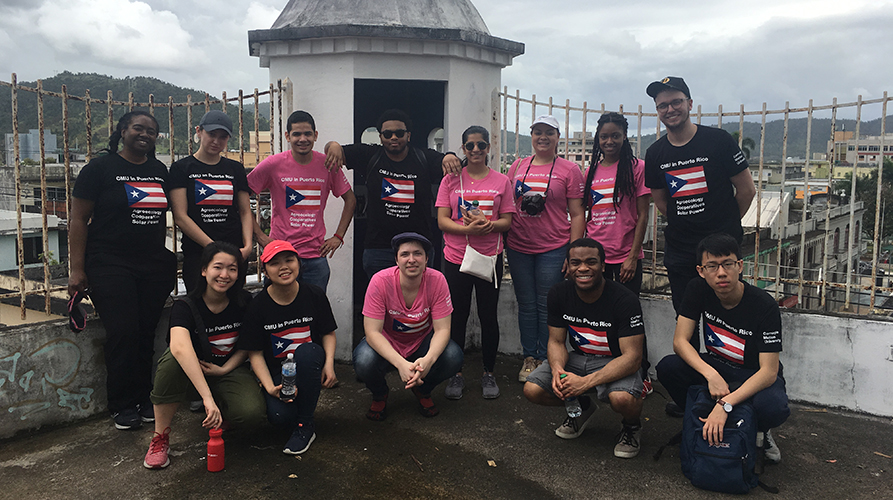 Participants in the 2019 CMU in Puerto Rico trip

A Trip Rooted in Service, Support and Awareness

Taulton emphasizes that the aim of “CMU in Puerto Rico” was to arrive on the island ready to listen and learn about what local residents and organizations need rather than showing up and dictating what needed to be done. The first year, the group took on service projects with independent farms and community organizations throughout the island that were still in recovery.

“We went in recognizing that the people in Puerto Rico had knowledge, talents and skills, and were better positioned to know what they needed than we were as outsiders. We were there to support the work they were already doing,” says Taulton. “What was really clear was that there were people there who felt forgotten, so I think showing up and really listening, showing them that we cared, made a difference.”

During the second trip, the students volunteered with more urban community organizations. Taulton noticed residents were talking less about recovery and more about rebuilding and revitalizing communities by strengthening connections to their Puerto Rican cultural identity. The CMU students worked on projects led by artist collectives and met with Goldman Environmental Prize-winner Alexis Massol González, founder of the solar power “energy oasis” at Casa Pueblo.

In an effort to deepen the relationship between the schools, students on the second year trip spent an entire day at University of Puerto Rico at Mayagüez (UPRM) in discussions with students and professors about topics including agroecology, solar energy, and environmental justice. The next day, UPRM professors took the CMU group to visit several communities that UPRM students worked with. There, they met with community leaders to get a better understanding of their needs. After the visit, the students decided to support a community-grid solar pilot project with an $8,000 grant taken from funds the club had raised throughout the year — including a $3,000 donation from CMU’s Wilton E. Scott Institute for Energy Innovation.

“Power is such an important issue. Some rural areas of Puerto Rico were without power for 11 months following Hurricane Maria,” says Taulton. “It creates a huge problem because people rely on electricity for life-saving equipment like respirators and dialysis machines, not to mention clean water.”

Creating a Nonprofit from Scratch

Taulton describes her experience creating the “CMU in Puerto Rico” club during her time at Heinz College as essentially creating her own nonprofit and then handing it off to new leadership. CMU Engineering and Public Policy senior Frank Andujar Lugo, who was the club’s vice president, will be leading the club into its third year following Taulton’s graduation.

She describes a team project in her first-year Environmental Policy and Planning class that involved creating a recovery and resilience plan for Puerto Rico, analyzing complex problems on the island from agriculture to economics, all the way down to roads, energy and water infrastructure, and FEMA’s response to the 2017 hurricanes.

In the course Creating Results Oriented Programming, she used “CMU in Puerto Rico” as her case, creating a logic model and funders presentation for the club.

“I took classes that allowed me to dive deeper into what it was like to run or work for a non-profit, which allowed me to professionalize what I was doing for ‘CMU in Puerto Rico,’” she says.

Taulton and her team created a speaker series which further connected “CMU in Puerto Rico” across campus as well as with the Puerto Rican community in Pittsburgh. The club hosted a talk with Emmy Award-winning filmmaker Juan Agustin Marquez (“The Last Colony”) and met with the comic book author Edgardo Miranda-Rodriguez (“La Borinqueña”).

“CMU students live and study in Pittsburgh, and there are communities here that deal with many of the same issues facing Puerto Rico, like homelessness, schools closing, education gaps, food insecurity, asthma rates and air pollution,” she says. “It’s a reminder that environmental matters and climate change affect us all. Injustice affects us all.”